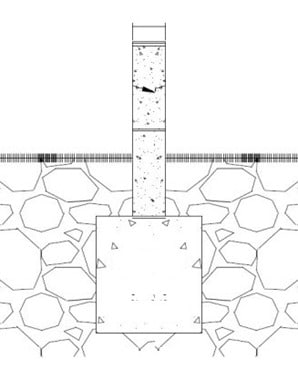 = angle of repose or internal friction of soil.
The above formula does not consider the factors discussed above and just provides the guidance on minimum foundation depth, assuming that the foundations are not affected by factors such as water table, frost action, types and properties of soil etc. as discussed above. This formula does not consider the loads from the structure on the foundation.
In the Rankine’s formula, it can be seen that foundation depth depends on the bearing capacity of soil, so, if the bearing capacity of soil increases, the depth of foundation also increases.
Foundation Depth Calculator:

Anonymous said…
You wrote a great article and you may interest to know about the Depth foundation calculator
10 October 2019 at 23:24

vipin chauhan said…
Powerful article. you must know about Types Of Foundation & Their Uses In Building Construction

unknown said…
Great article with excellent idea!Thank you for such a valuable article. I really appreciate for this great information.. TX Foundation Repair Company
12 September 2021 at 02:22

areebashaikh said…
Foundation repair austin Thank you because you have been willing to share information with us. we will always appreciate all you have done here because I know you are very concerned with our.
28 September 2021 at 03:12

KASHAF said…
Tampa FL foundation repair company Thank you because you have been willing to share information with us. we will always appreciate all you have done here because I know you are very concerned with our.
28 September 2021 at 07:08

Dr Siddharth Prakash said…
A very awesome blog post. We are really grateful for your blog post. You will find a lot of approaches after visiting your post. foundation repair companies in Tampa

Factors which affect selection of foundation for a building can be many from the soil conditions to the type of structure and loads from the building. All the factors are considered during selection of foundation for durable building construction. Factors Affecting Selection of Foundation Following are the factors which affect the selection of suitable foundations for building construction: Loads from building Type of soil Type of structures in neighborhood Type of foundations 1. Loads from Building The first factor considered is loads from building on the foundation. This load is a combination of dead load and imposed loads on the buildings. Other loads such as wind loads, earthquake loads, snow loads etc. are also considered based on location. The quantity of loads depends on the type of structure, number of floors and material of construction. As the number of floors increases, the dead load and imposed loads also increase. Choice of material for construction su
Read more

Underpinning is a method for repair and strengthening of building foundations. Underpinning methods, procedures and their applications in strengthening of different types of foundations is discussed in this article. There are situations where a failure in foundation or footing happens unexpectedly after the completion of whole structure (both sub and superstructure). Under such emergency situation, a remedial method has to be suggested to regain the structural stability. The  method of underpinning  help to strengthen the foundation of an existing building or any other infrastructure. These involve installation of permanent or temporary support to an already held foundation so that additional depth and bearing capacity is achieved. Selection of Underpinning Methods Underpinning methods are selected based on age of structure and types of works involved. Structure categories based on its age: Ancient Structures :Age greater than 150 years Recent Structures : Age between 5
Read more