January 04, 2018
Underpinning is a method for repair and strengthening of building foundations. Underpinning methods, procedures and their applications in strengthening of different types of foundations is discussed in this article.
There are situations where a failure in foundation or footing happens unexpectedly after the completion of whole structure (both sub and superstructure). Under such emergency situation, a remedial method has to be suggested to regain the structural stability.
The method of underpinning help to strengthen the foundation of an existing building or any other infrastructure. These involve installation of permanent or temporary support to an already held foundation so that additional depth and bearing capacity is achieved. 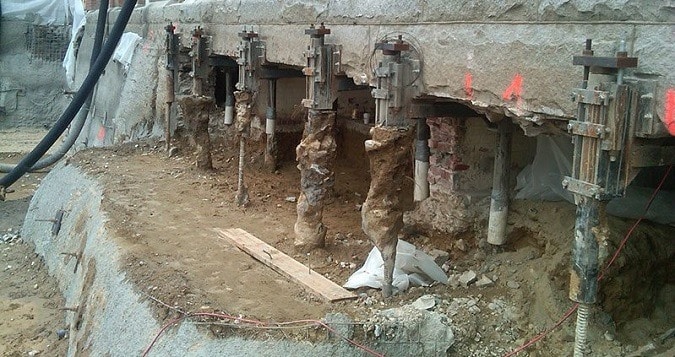 Underpinning methods are selected based on age of structure and types of works involved.

Structure categories based on its age:

Types of works for selection of underpinning methods:

The structure has to be converted to another function, which requires stronger foundation compared to existing

The following problems of a building has to undergo protection works:

There are many reasons that make an engineer to suggest underpinning method for stabilization of the substructure such as:

The decision of underpinning requirement can be made based on observations. When an already existing structures start to show certain change through settlement or any kind of distress, it is necessary to establish vertical level readings as well as at the offset level, on a timely basis. The time period depends upon the how severe is the settlement.
Now, before the excavation for a new project, professionals have to closely examine and determine the soil capability to resist the structure that is coming over it. Based on that report the need for underpinning is decided. Sometimes such test would avoid underpinning to be done after the whole structure is constructed.

Mass concrete underpinning method is the traditional method of underpinning, as it has been followed by centuries. The method involves extending the old foundation till it reaches a stable stratum.
The soil below the existing foundation is excavated in a controlled manner through stages or pins. When strata suitable is reached, the excavation is filled with concrete and kept for curing, before next excavation starts.
In order to transfer the load from old foundation to new one, a new pin is provided by means of placing dry sand-cement pack. This is a low-cost method suitable for the shallow foundation. 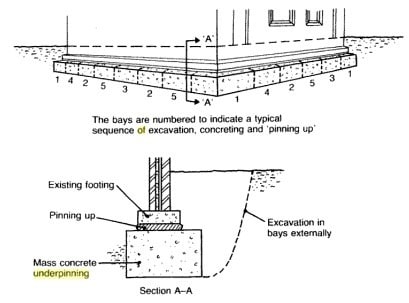 Fig.1: Mass Concrete Underpinning
For more complicated problems related to the foundation other superior methods have to chosen.

Figure-2 represents the arrangement of cantilever pit method of underpinning, which is an extension of pit method. If the foundation has to be extended only to one side and the plan possess a stronger interior column, this method can be used for underpinning.
Advantages of Cantilever Needle Beam Method:
Disadvantages: 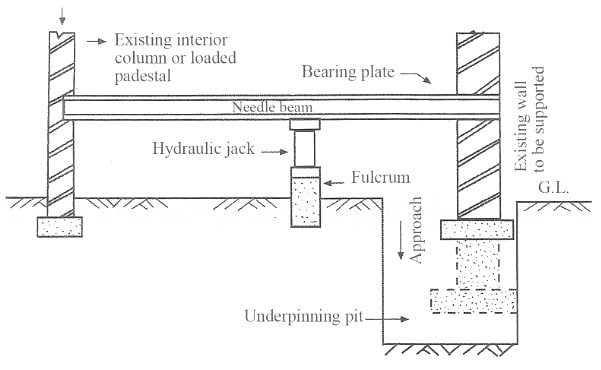 It is also termed as base and beam method which was implemented after the second world war. This method progressed because the mass concrete method couldn’t work well for a huge depth of foundation.
It is found feasible for most of the ground conditions. Here reinforced concrete beams are placed to transfer the load to mass concrete bases or piers as shown in figure 2.
The size and depth of the beams are based on the ground conditions and applied loads. It is found economical for depth shallower than 6m. 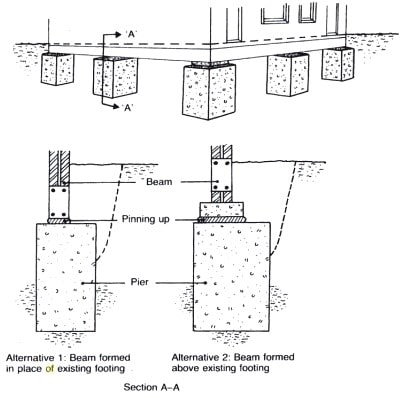 This method can be implemented where the loads from the foundation have to transferred to strata located at a distance greater than 5m. This method is adaptable for soil that has variable nature, access is restrictive and causes environmental pollution problems.
Piles of diameter between 150 to 300mm in diameter is driven which may be either augured or driven steel cased ones.

In this method, piles are driven on adjacent sides of the wall that supports the weak foundation. A needle or pin penetrates through the wall that is in turn connected to the piles as shown in figure-3.
These needles behave like pile caps. Settlement in soil due to water clogging or clayey nature can be treated by this method 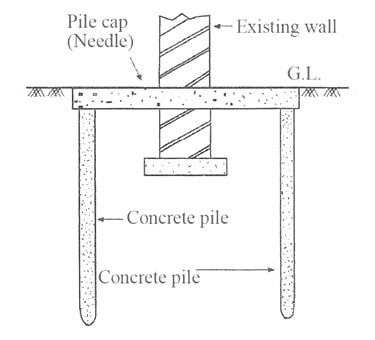 It is employed for strip or pad foundation. Can be used for building with 5 to 10 stories. Here the subsoil is made compact and compressed, in the new excavation level that gives predetermined loads to the soil. This is done before underpinning is performed.
Here reduced noise and disruption are expected. This method cannot be implemented for raft foundation.

Devon said…
Interesting read, what do you think about resin injection underpinning? We've been using it with great success for our underpinning in Melbourne services for our clients.
12 January 2021 at 21:35

Unknown said…
I like this blog because of that it contain a great information. and Deep Strip Foundations is a small family run business offering a professional and expert service of piling and groundwork throughout Essex, Hertfordshire and London.
9 December 2021 at 05:40

Factors which affect selection of foundation for a building can be many from the soil conditions to the type of structure and loads from the building. All the factors are considered during selection of foundation for durable building construction. Factors Affecting Selection of Foundation Following are the factors which affect the selection of suitable foundations for building construction: Loads from building Type of soil Type of structures in neighborhood Type of foundations 1. Loads from Building The first factor considered is loads from building on the foundation. This load is a combination of dead load and imposed loads on the buildings. Other loads such as wind loads, earthquake loads, snow loads etc. are also considered based on location. The quantity of loads depends on the type of structure, number of floors and material of construction. As the number of floors increases, the dead load and imposed loads also increase. Choice of material for construction su
Read more