Following are the factors which affect the selection of suitable foundations for building construction:

The first factor considered is loads from building on the foundation. This load is a combination of dead load and imposed loads on the buildings. Other loads such as wind loads, earthquake loads, snow loads etc. are also considered based on location.

The quantity of loads depends on the type of structure, number of floors and material of construction. As the number of floors increases, the dead load and imposed loads also increase.
Choice of material for construction such as reinforced concrete or steel construction also has impacts on foundation. Reinforced concrete buildings exert more loads on the foundation compared to steel structures.
Based on the safe bearing capacity of structure and quantity of loads on foundation, type of foundation and its base area is calculated.

Soil is a mixture of solid particles, moisture and air. Soil can be of many types such as clayey soil or expansive soil, sandy soil or loose soils etc. The soil near surface is called as top soil and below a depth of 300mm is called as sub soil. Generally subsoil is used as base for foundation for small buildings.
However, soil investigation should be carried out to know the nature of soil, depth of water table, type of soil, depth of different layers of soil and to know the bearing capacity of soil at different levels for large structures.
When the load is transferred from the structure to soil through foundations, the soil tends to consolidate and settlement of foundation occurs. This consolidation process can be quick in case of non-cohesive soils such as sands and can even take years for other soils.
The complete settlement of foundation in sandy soil may occur even before the building construction has been completed. Clayey soil can hold the water for longer time and thus settlement is very slow and can take years. Soil clayey holds large amount of water, and thus settlement of foundation is large in such soils.

The settlement of foundation causes cracks in building walls, beams, slabs etc. and building can even fail in case of large settlement. 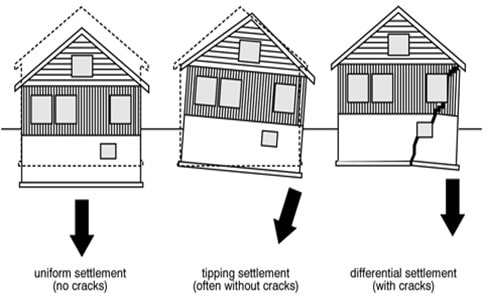 3. Type of Structure in Neighborhood

Types of foundation such as isolated foundations, combined footings, pile foundations and raft or mat foundations etc. based on the type of soils and loads from the buildings can be selected based on suitability and requirement.

Anonymous said…
There are different types of foundation used in building construction choosing one of them is difficult task.
26 April 2021 at 04:09

donnaj edwards said…
It is a very informative and useful post thanks it is good material to read this post increases my knowledge. Oversized Pivot Doors
25 June 2021 at 22:11

Underpinning is a method for repair and strengthening of building foundations. Underpinning methods, procedures and their applications in strengthening of different types of foundations is discussed in this article. There are situations where a failure in foundation or footing happens unexpectedly after the completion of whole structure (both sub and superstructure). Under such emergency situation, a remedial method has to be suggested to regain the structural stability. The  method of underpinning  help to strengthen the foundation of an existing building or any other infrastructure. These involve installation of permanent or temporary support to an already held foundation so that additional depth and bearing capacity is achieved. Selection of Underpinning Methods Underpinning methods are selected based on age of structure and types of works involved. Structure categories based on its age: Ancient Structures :Age greater than 150 years Recent Structures : Age between 5
Read more